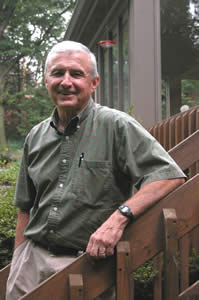 He sinks into a leather couch in the sun room, between his wife Roberta's paintings on the walls inside and her gardens, which they tend together, everywhere beyond. Here in his home, he easily fields questions with grace and modesty.

"My high school football coach asked me how I'd like to go to Colgate. It was the first I'd heard of the school. I always assumed I would go to college but nobody had any money to pay for it. Colgate gave me a War Memorial Scholarship. That came as a big surprise, too."

Tom played football and baseball ("I saw a lot of good games," the modest letter winner says), joined a fraternity, and formed lasting friendships. "If you saw him with his football friends, you'd think they were all 19," says Roberta.

"I certainly did enjoy my time at Colgate," says Tom, who majored in economics, "but I wasn't a great student."

"Until his senior year," interjects Roberta. The Van Notes married the month before Tom's senior year and lived in downtown Hamilton.

Tom, who had joined ROTC, graduated as a 2nd lieutenant, but the Air Force didn't need people at that time and he took a job with Union Carbide, which he enjoyed.

"I liked it so much I tried to resign my commission but then the Russians launched Sputnik and nobody was getting out of the service," says Tom, who spent six and half years flying. He eventually became a commercial pilot and had a 30-year career.

"If it hadn't have been for the Russians, I'd have been driving around South Jersey selling." Instead, Tom traveled the globe.

"I've been everywhere but Hong Kong. The job kept us apart just enough so we got along better." Roberta doesn't argue. "The only problem was I'd have my children just perfect and Tom would come home and ruin it."

The Van Notes three children are grown, doing well, and have provided their parents with grandchildren. All are source of pride.

"As far back as I can remember, I sent money to the Annual Fund. Nobody ever called me a chairman, but I've helped with fund-raising," says Tom, who also served as class editor.

"Tom's heart has always been with Colgate because Colgate gave him his start," says Roberta.

"I do appreciate what Colgate did for me and giving back is worthwhile. You can't do anything better than help educate kids."

In 2002, the Van Notes made a gift of real estate to Colgate in honor of his 45th reunion at Colgate. Tom explains how it came about.

"I was flying out of Berlin in 1979 when I learned a friend had died suddenly of a heart attack. His widow had 21 acres of farmland in western Massachusetts. I took a loan from the Berliner Bank and bought it. I held on to it not knowing what to do with it. The kids didn't want it so I decided to give it to Colgate."

The property was raw land, prime for development, and had appreciated in value during the 23 years that Tom and Roberta had owned it. After conferring with his financial advisor and talking with Colgate's office of planned giving, Tom decided to give the land to Colgate.

The benefits of the gift to Tom and Roberta were significant. They received an immediate charitable income-tax deduction for the fair-market value of the land and relieved themselves of the cost of carrying a non-income producing asset. The gift also reduced the size of their future taxable estate and provided the Van Notes with the satisfaction of making major gifts to Colgate and Roberta's alma mater, Douglas College. The real estate enabled the Van Notes to make a charitable gift that otherwise would have been impossible.

"I wouldn't have taken a sum like that out of my investments," comments Tom. "It works to everybody's advantage. I'm happy and Colgate is happy."