"Colgate was certainly the first profound threshold for me," says Fred Meendsen '54.

It is a perfect spring day just yards from a tranquil estuary known as San Domingo Creek in the parlance Talbot County, Maryland, where Fred and his wife Nancy have retired. There in his den, surrounded by walnut and nautical prints, Fred refers to his Colgate experience as "a seminal event" that has given rise to a lifetime of involvement and support.

The connection began casually enough. As a boy, when it came time to go to college, Fred leafed through a stack of catalogues and made an "intuitive judgment Colgate would be about right."

More right than he could have imagined, it turns out.

"I'm the luckiest guy in the world. I applied to one college, and everything I might have dreamed came true. I bloomed. Colgate did a lot to grow Fred Meendsen. It was more important to me than my attendance at the Harvard Business School."

It was at Colgate the self-described "very average kind of kid" became an excellent student who was seeing things he'd never seen before and meeting all kinds of people.

Only on campus for five semesters due to an accelerated program and a semester off campus with the economic study group, Fred recalls an intense time during which he gained confidence.

"I understood it was time to get serious," he says.

After graduate school and the service, and starting his climb within the corporate world, Fred was recruited to be a team captain during a 1960s Colgate capital campaign.

"I made dozens of personal contacts with alumni throughout northern Bergen County." He was also reconnected.

In the 1970s, the Meendsen family was introduced to Colgate Camp by classmate and Garden City High School buddy Harry Thumser '54, and in the '80s Fred Jr. '82 followed in his father's footsteps to Colgate.

All the while, Fred's involvement was increasing, finding time for his alma mater even with his duties as a corporate officer of a Fortune 100 company.

Fred chaired the Presidents' Club, then became president of the Alumni Corporation and later a trustee. He holds a Maroon Citation and in 1999 was presented with the Distinguished Alumni Award.

Now a trustee emeritus and still a keen campus observer, Fred looks back to "an undergraduate experience that was wonderful" and years of volunteer service "that was supported" by the University's professional staff.

"Colgate has been fun to me—fun in the sense it was challenging and exciting. It stimulates you and keeps you alive." 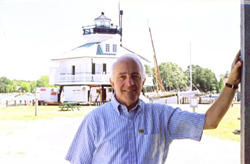 A desire to see the University always better inspired Fred and, at least in part, explains his financial support.

"You have to want to make a gift," says Fred, who has invested in Colgate's Pooled Income Fund.

"I'm a three yards and a cloud of dust guy. Keep it simple. I had some stock that kept appreciating so I was faced with a significant capital-gain tax if I sold it. After consulting with my financial advisor and the Colgate Planned Giving Office, I decided to give my stock to Colgate's pooled income fund. It provides my wife and me with a steady income and because the fund is well managed, it's been a good hedge against inflation. After my wife and I pass on, Colgate will receive the corpus."

"I have also made a bequest provision for Colgate as well. This was a decision that my wife and I made together after talking with our children. We have provided in other ways for the children, but we wanted them to understand why we had included charitable gifts in our wills. A bequest provides financial flexibility, allowing us use of assets during our lives before making a major gift to Colgate", explained Fred.

Life is good. The water is high in Santo Domingo Creek, blue crabs are in season, and the Chesapeake Bay Maritime Museum, where Fred is a board member, has just completed a capital campaign. During a tour, Fred proudly points out highlights among the 18 acres of exhibits and collection of skipjacks. When a pair of Colgate visitors is introduced to museum staffers it is obvious from their reactions they have heard stories about how the University operates.

"The genius of Colgate is its efficiency," says Fred Meendsen, who found his way as a student and helped show the University the way as an alumnus.

"It is an incredible college."