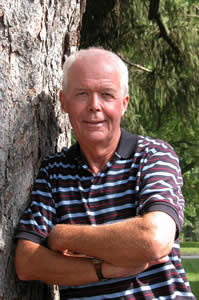 Dick and Betty Hanaway—Ready for the What's Next

"Anyone can do what I do," says Dick Hanaway '56, a street-smart developer and trail-savvy adventurer. "You just put one foot in front of the other."

By keeping it simple, Hanaway has built a thriving business, has stood on the high point in every state in the union, danced competitively, is a master's ski racer and has biked the entire East coast and from the Pacific to the Atlantic.

"You've got to have a dream if you want a dream to come true."

Dick followed his brother Jim '55 to Colgate "He paved the way for me, and Colgate was generous and made it possible." But it wasn't necessarily easy going.

"The problem was I was 17 with the maturity of a seven-year old," says Dick, who fell in with a fast bunch including a returning Korean vet. "I don't know how I survived the first month."

He actually didn't make it through pre-med and, in his sophomore year, declared graduation as his major with a minor in English Lit.

"I couldn't read or write, but it made me settle down and prove to myself I could do it. Fear was a great motivator. I was working summers unloading freight cars and knew what I didn't want to do."

Even with his workload, Dick managed to have fun. He "met a lot of great guys. When you're stuck in the middle of nowhere, you pull together." Dick was hardly stuck, though. He became an adept hitchhiker and never failed to make his destination on the appointed day.

"Whatever I've done, wherever I've been, I've always made the best of it."

Following Colgate, Dick spent three years in the Air Force in nearby Rome in the backseat of a Scorpion jet fighter. "We'd fly north over Canada looking to intercept Russian bombers before they got to our cities. Thank God they never came."

Back in civilian life, he was finally able to start pursuing his dreams as an entrepreneur. Dick, who has always had his own business, starting with a paper route when he was seven, eventually owned a small food processing company. The enterprise was undercapitalized, though, and he began to teach "to help make ends meet. At one point, I had five jobs." He also earned a masters, then began pursuit of a doctorate but soon faced a decision. A career in school administration was considered but an advisor had seen Dick light up whenever the subject of construction and real estate came up.

Dick took up skiing with his children, as a family activity. Today, he is an accomplished competitive downhill racer who can hold his own at the national level. "I'm nervous when I start, and it is a rush when I finish." In between, as he does in all his endeavors, Dick "attacks the line, holds the edge."

Dancing was the same. He followed his dream of becoming a ballroom dancer by trekking to Boston weekly for coaching for over 20 years. Not a "show biz guy," Dick was enthralled by the movement, the line, the pursuit. There is nothing like moving across a dance floor to the strains of a Strauss waltz. It's magical!

Then he wanted to walk a thousand miles. So he flew to Georgia and completed the 2,168 mile Appalachian Trail in 2 pieces: Georgia to Pennsylvania in the spring of 1997 and Maine in 1998. Meanwhile Dick and his wife Betty began serious climbing which took them to the top of Mt. McKinley in Alaska. After that, the idea of climbing to the highest elevation in the other 49 states was a new challenge. They discovered there was a Highpointers Club which identified each peak and a suggested route for climbing.

The Hanaways accepted the challenge and became the first couple to make all 50 pinnacles together, and they summitted each on their first attempt. Some of the best times didn't involve technical or even exacting climbs but rather the logistical puzzle of finding the most expedient way to the top of states like Iowa, Kansas, and Indiana. 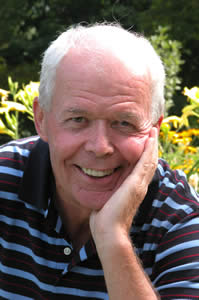 Dick has a daughter living on the west coast that he and Betty visited and soon they were biking eastward. "We just kept going and pretty soon we were in the hills of Idaho." In Western Minnesota, Dick stood in wonder as huge combines combed the fields in every direction. "America at work," he says, still emotional.

Recent bike rides have taken the couple down the east coast from Maine to Key West. "You've got to have a goal," says Hanaway, summing up his philosophy of business, life, and even giving to Colgate.

"When I made my initial pledge it was beyond my reach but that created the incentive to stretch."

Like the rest of his life, Dick's giving to Colgate has been both creative and unique. Dick has provided for Colgate in his estate by creating a promissory note secured by a mortgage in commercial property. This unusual approach ensures that he and his spouse will benefit from the cash flow from the property during their lifetimes, and that Colgate will receive equity in the property upon their deaths.

"There are no significant charitable tax benefits to giving Colgate a promissory note, but my main interest was to make a planned gift to Colgate using the equity in real estate while providing income for both of us during our lives," comments Dick.

Dick's unique plan will reduce his taxable estate, however. Moreover, he hopes that his gift will encourage others to consider creative ways to unlock some of the value in non-cash assets in order to make a planned gift to Colgate. Dick Hanaway isn't certain what's next but one thing is certain. He's ready.