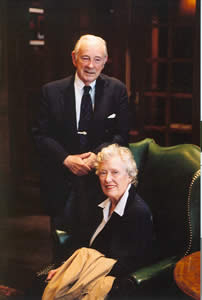 For more than 60 years, George Fisk '40 has given his all for Colgate and yet he says, with a tear in his eye, "The balance sheet is still on the other side. I'll always be indebted to Colgate."

George Fisk has been an enormous success. As an undergraduate he was president of Kappa Delta Rho and editor-in-chief of the Salmagundi, and then he served as a major in the U.S. Army Signal Corps and was awarded the Bronze Star for his service in Europe. With a law degree from Columbia, George has worked for Allied Chemical, Mobil Oil, and Container Corporation of America.

Despite the demands of a challenging career, George has been an active volunteer for Colgate. He has been a fund-raiser, national vice chairman during the ERA Campaign, chaired the Matching Gift Program, served on the Annual Fund Executive Committee, and headed up the Eppy Barnes Fund. He has been active in admission, a loyal member of both the Maroon Council and Presidents' Club and was instrumental in the production of A Roar From the Valley, the history of Raider football. George was the past chairman of the Planned Giving Committee during the last campaign and remains active as an esteemed member. Understandably, he has been recognized with the Maroon Citation and the Alumni Award for Distinguished Service.

"Colgate has so much to offer," says George. "It's the intangibles that mean the most and are apparently not taken into account by U.S.News & World Report. I learned how to think, how to work and deal with people. Colgate is the most people-oriented institution I've ever known and to top it all, it has a sense of humor."

George, who had grown up listening to the '32 football games on the radio, knew from his first week on campus he had found his place and he has been a strong salesman for Colgate ever since, beginning with his family. His wife Dorothy, who has been a frequent campus visitor since their courting days, was party queen freshman year and has shared the Colgate spirit. "It's been a big thrill for me to be a part of it," she says.

"I am among the first alumni to have a son and a daughter graduate as well as a grandson. It didn't take much arm twisting either," claims George. Son Robert, who passed away in 1990, graduated in 1969, and daughter Peggy is a member of the class of 1977 and married to Dr. Pierre Genvert '75. George's grandson, Mike Dumphy is a member of the Class of '03. Daughter Peggy, now teaching history at Salisbury University, is deeply indebted to Colgate for her strong background and training in history.

"I've been so blessed by all the Colgate people I've met all over the world," says George. "It's a serving group. We meet and feel we're right back on campus again."

"Private colleges could be in deep trouble without help from alumni," says George, who has been most helpful. "I believe very strongly in planned giving. How can I lose? I can benefit the school and it pays me too—all better than the stock that I gifted to Colgate. How easy it is to help Colgate and yourself at the same time."

"I wanted to lock in the gains on my stock and avoid paying the capital-gain tax on the appreciation. I also wanted to ensure adequate income for Dorothy and me during retirement. Our charitable gift annuities pay us a very attractive return guaranteed for life so we have piece of mind despite the economic uncertainty we're experiencing nationally. At our deaths, Colgate will receive the corpus."

George has also used the power of planned giving to make a significant testamentary gift to Colgate. He has created a charitable remainder trust that will be funded with his IRA upon his death.

"I recognized that gifting the IRA to my children would not be tax-wise since estate and income taxes would take as much as 85 percent of the corpus. So it made sense to provide for my children and grandchildren with other assets and to use the IRA to make a gift to Colgate after my wife and I pass on. The charitable remainder trust will provide income to my wife during the rest of her life and then its corpus will be gifted to the George W. Fisk Library Endowment Fund at Colgate."

George Fisk and Colgate have been linked for life. Each feels greatly indebted to the other, which is the best of all relationships. This wonderful man continues to benefit from Colgate through his planned gifts, which in turn benefit Colgate. George would encourage you to explore how you can enter into a relationship equally rewarding.