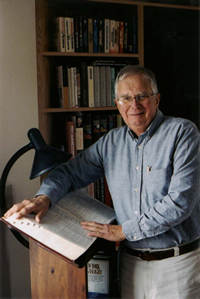 "I was the first person in my family to go to college," says Ron Schaupp '56, "so when I enrolled at Colgate, it was groundbreaking."

Schaupp had been a leader and outstanding student in high school on Long Island but remembers arriving at Colgate with "a lot of humility, and it was warranted." He wanted to be a doctor, a dream that began after scarlet fever kept him bedridden for nearly six months when he was in the fifth grade.

"The long purpose of my going to Colgate was to prepare myself for medical school. I realized that wasn't the intent of a liberal arts education. Most physicians are well trained, but not all of them are particularly well educated," says Schaupp.

"I grew up at Colgate. Even unknowingly, I learned a great deal," and he speaks the names, almost reverently, of those who educated him beyond training. "Jonathan Kistler, Alfred Seeley Brown, Bob Todd, M. Holmes Hartshorne. To this day I can't read a book, any book, without paper and pen," says Schaupp, who until his retirement was board certified in radiology and nuclear medicine.

"I acquired the ability to reason and think and to express myself verbally and with the written word. I came away from Colgate with an insatiable urge to learn," an intangible that was constantly in play during his 32-year career in a field that changed perhaps more dramatically than any other in medicine.

By the time Schaupp graduated, only eight or nine of his classmates went on to medical school, with four or five more headed to dental school.

"Professor Brown and Joe Thurner provided the course material that separated the wheat from the chaff," remarked Ron.

It was Dr. Charles Foster who, without a murmur of protest, saw to it Schaupp took Hartshorne's more demanding 300 level religion course rather than the senior's own pick. "Ron, you're going to love this class," said Foster, puffing on his pipe.

Despite his efforts, Schaupp earned C's on the first two hourly exams, then stayed up into the wee hours with his Lambda Chi brothers preparing for the final.

"Sometime that night I had an epiphany, and what was in that course was transformed into common sense. The next day I wrote and wrote and M. Holmes Hartshorne gave me a B, and I knew my final exam was a high A."

It is one of so many good memories—working for board in the fraternity dining hall, counting fruit flies while all dressed up for party weekend in the dirt basement of Old Bio, running into Professor Brown at mass at St. Thomas's—that enliven a morning conversation in Ron and June Schaupp's retirement home above Lake Moraine in Hamilton. 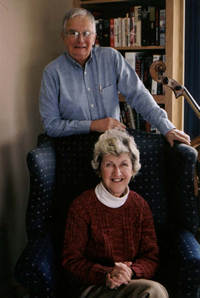 "I feel I owe Colgate for what it provided me," says Schaupp, who even in medical school always found $5 to send to his alma mater. His appreciation has grown.

Schaupp has created a generous bequest provision. "Over the years I have come to really dislike sending a check to the state or federal governments for any tax. If there were productive use of funds, I wouldn't feel so adamant."

The flexibility and ease of a bequest to Colgate was especially attractive to Ron and June. "We had several major things to consider—making sure that we had sufficient assets to live on during retirement, providing for our children, and supporting the charitable causes that June and I believe in. A bequest allowed us to balance all of those issues while ensuring the flexibility necessary to meet the uncertainty of the future," remarked Ron.

"Because I will use my IRA to fund the bequest, we avoid the deferred income tax and estate taxes that can consume most of an IRA passed onto a non-charitable beneficiary," added Ron.

"I look at this bequest as a special relationship with Colgate. Living in Hamilton has deepened the connection, too.

"The generosity Colgate has provided to the community is awesome. June and I have been extremely happy with our retirement and are taking advantage of the privileges Colgate provides."

Ron Schaupp is never far from a smile as he and June entertain in their comfortable home not so far from the campus where a boy became a man. There is satisfaction and recognition when he says, "We believe in angels. This was meant to be."