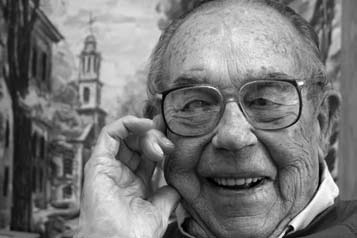 When Dr. Howard “Hoddy” Jones ’39 P’67 established Colgate University’s first gift annuity in 1993, he made the decision to restrict the use of the gift to financial aid.

Howard and his wife, Margaret, established their first gift annuity with Colgate in honor of their 50th anniversary and ultimately did three more—all two-life charitable gift annuities designated for the Howard and Margaret Jones Endowed Scholarship. The annuities will ultimately provide much needed financial aid allowing future students the opportunity of a Colgate education—in the meantime, they are also currently providing income for life for Margaret since Howard’s passing on June 7, 2008.

Howard knew, firsthand, the benefits of financial aid for deserving students. A descendant of Amos Kingsley, one of Colgate’s founders, he was able to attend thanks to a “half scholarship.” While here, he served as president of the junior class, earned membership in the junior and senior honor societies, and played football, lacrosse, and hockey (All- America in 1939).

After serving as a first lieutenant in the transport command during World War II, Howard returned to Colgate as an instructor and earned his master’s and doctoral degrees in education at Syracuse University. He later served as president of the Northfield Mount Hermon School. But his passion was about helping people connect with Colgate and finding ways to extend support to students.

He was Colgate’s first vice president of Development, served as vice president and special assistant to President George Langdon and was a member of the Board of Trustees. In 2002 and 2003, he helped set a new record for alumni participation (55%) by making hundreds of calls from Colgate’s Advancement Office.

As Howard once put it, “We feel a responsibility to help others have the same opportunities we have had.”

As a retired corporate vice president of the General Electric Company, Cecil “Ces” S. Semple ’39 knew how to bring good things to light. That included establishing an endowed scholarship to put a Colgate education within the grasp of promising students.

Ces, who died in June, funded the scholarship through a sizable bequest in his will, as well as seven charitable gift annuities which provided him annual income during his lifetime backed by the assets of the university. In doing so, he embraced the goals of Passion for the Climb: The Campaign for Colgate, which seeks to raise $87.5 million in financial aid endowment. Ces, a member of Colgate’s James B. Colgate Society, believed that a Colgate education should be about hard work, initiative, and academic ability.

Born on the family tea plantation in India, Ces was educated at schools in Scotland and England. He was seven when his father, an engineer, died while playing polo. Coming to America with his mother and sister, Ces graduated from high school in Yonkers, New York.

At Colgate, he served as captain of the tennis team, business manager of the college yearbook, and as an officer of the DKE Fraternity while earning a B.A. degree with high honors in the classics. His devotion to his studies earned him several academic scholarships.

After graduating, Ces enjoyed a long, active business career capped by 20 years at General Electric until his retirement in 1986. He also continued playing tennis, winning the British Colonial Doubles Championship.

Just as practice allowed Ces to successfully compete on the tennis court, endowed scholarships, such as his, allow Colgate to successfully compete for highly motivated students. They make it possible for the university to attract those who, like Ces Semple, possess the “Colgate qualities” of tenacity, intelligence, and a passion to challenge themselves.

Gifts in support of financial aid endowment, a key priority of Passion for the Climb: The Campaign for Colgate, will ensure those qualities remain on campus a long, long time.